A decade for research?

In this presentation I want to consider the possible implications of the UN Sustainable Development Goals (SDGs) and the Ocean Decade for the conduct of maritime archaeological research through to 2030.

For a start, even the notion of a decade-long timescale is helpful. Setting all other things aside, we might ask of ourselves where we might want to be in terms of our own research by 2030? What steps might we take in that direction? What are the connections? What are the opportunities? What are the barriers?

Drawing the SDGs into this consideration adds a fantastic challenge. In some respects, we might see the SDGs as a research framework, helping to organise our thoughts; but it is better still to see them as an impact framework. Their demand is explicit: how will maritime archaeological research help achieve the SDGs by 2030 (Henderson 2019)?

Of course, there will be a broad spectrum of research: some with very direct application; some which might be regarded as more distant from application but plays an essential enabling role in terms of techniques or concepts, for example. Nonetheless, being able to relate research to the SDGs is, I think, vital.

One of the reasons why it is important to think about the eventual application of research is that it encourages archaeologists to think about something that is widely considered to be problematic: the science-policy interface, i.e. the mechanisms through which knowledge and understanding make a difference to the decisions of public authorities. I am suggesting here that it is not enough to master subjects that have a bearing on public policy; we also need to build our capacity to cause change.

Closely allied to the science-policy interface is another issue that is often considered problematic: the communication of research to outside audiences. Assuming we are already able to communicate effectively amongst ourselves – within the maritime archaeological research community – there are three sets of audiences with which we need to engage effectively:

– the public – not least as voters, consumers and stakeholders;

– politicians and their civil servants in local, national and international authorities; and

And by communicating I don’t mean ‘telling’: I mean changing their minds.

Changing peoples’ minds and changing peoples’ decisions is never going to be easy, nor is there a single method to recommend. There are lots of different channels: thorough NGOs, committees, political representatives, campaigning, demonstrating and so on. We might feel that getting involved in advocacy is a separate matter out our research: I’m suggesting the opposite – advocacy must be part of our research.

Is there a danger that taking a stand on contemporary issues – and advocating in support of that position – might detract from the objectivity of our research?

I don’t think so, on two counts:

First, I’m of the view that research is always situated politically whether we are conscious of it, or make it explicit, or not.

Second, if objectivity resides in transparency and contestability, then combining research with advocacy requires that our evidence and arguments are even more well-founded.

Maritime archaeology: part of the plan?

I would like to turn now to the UN Decade of Ocean Science for Sustainable Development 2021-2030, or the ‘Ocean Decade’. This initiative is very welcome because it is addressing how science can deliver the SDGs in the environment within which we work; there is no equivalent vehicle for addressing the relationship between archaeological research and the SDGs on land, so we are fortunate.

The Ocean Decade provides a framework, including a global institutional framework; it will provide a focus for existing and perhaps new funding; and it is creating momentum. Although archaeology did not feature very strongly in its original conception of ocean science, cultural heritage has definitely been receiving attention in the current planning phase of the Ocean Decade. Archaeology also resonates with issues raised in the First Global Planning Meeting: about the need for marine sciences to engage more with the social sciences and humanities; about the need for attention to the science-policy interface; and about the need for greater public engagement.

Progress has been made for the place of archaeology within the Ocean Decade through the kinds of advocacy that I have just mentioned. With support – including very welcome support from the Honor Frost Foundation (HFF) – archaeologists were able to make a notable impression on the First Global Planning Meeting in May 2019 (Trakadas et al. 2019). Subsequently, the Ocean Decade Heritage Network has been set up to maintain momentum and facilitate archaeologists’ continuing engagement with the Decade: I would encourage all of you to join.

Over the last few months we have been spreading the word to help build a truly global network of marine archaeologists. As well as events for archaeologists like today, we have focussed on reaching out through meetings where we might be perhaps the only archaeologist among a broad range of marine scientists: at GLOSS, at regional workshops in Tokyo, Tromso and Venice, and just this week at a specific event at the Ocean Sciences Meeting in San Diego.

We wait to see how this engagement will be reflected in the plans for the Ocean Decade that are currently being developed. We hope, very much, that archaeology will be acknowledged as an ocean science alongside other disciplines, and that its potential to contribute to the delivery of the Ocean Decade’s objectives – and hence to the SDGs – will be recognised. We hope that, seeing maritime archaeology as a component of the plan for the Decade, we will then be able to elaborate what this might mean in terms of research projects during the implementation phase.

But we are not there yet: we have to continue to make the case for cultural heritage in the Ocean Decade, and we would be very grateful if you could make that case also:

– Send us blogs on the relationship between marine archaeology, the Ocean Decade and SDGs that we can add to the ODHN website …

– Be a spokesperson for marine archaeology at marine science meetings …

Even if archaeology does not feature as explicitly in the plans for the Decade as we might hope, the Decade is still going to be enormously important for marine research and for the part that archaeology can play. It is important not to think of the Decade as an international, UN initiative alone. The stimulus and a certain amount of organisation is being provided at a global level: but implementation will depend on activity occurring regionally – such as in the eastern Mediterranean – or through national marine science programmes. Implementation will also depend on individuals – such as yourselves – framing their own work over the next ten years in terms of the Ocean Decade. Familiarity with the Ocean Decade, its objectives and priorities should be a strong expectation in all our work.

Another feature of the Decade, I think, is that it will not only influence publicly funded marine science. Already, the third sector – NGOs, charities and philanthropic organisations – are engaging strongly with the Ocean Decade: the HFF is a good example but I’m aware that marine archaeological NGOs are getting involved too. But I think there is further scope: to use the Ocean Decade as a common framework across academia and NGOs but also the development-sector, where I know from my own experience there is expertise, capabilities and resources to draw into the investigation of key archaeological questions.

A further area where the Decade is already starting to erode boundaries is between disciplines. Indeed, this will be key to the success of the Decade and of the place of archaeology within it. Interdisciplinarity is central and I appreciate that this can present a struggle. As I mentioned earlier, many marine scientists have only a partial understanding of what archaeologists do: our fascinations may seem incidental; the relevance of our work, unclear. But we already have allies and I would encourage you to reach out to other networks, such as the Climate Heritage Network, Oceans Past Initiative, and MarSocSci. But in many quarters, we still have to demonstrate the strengths, value and utility of archaeology to other marine scientists. 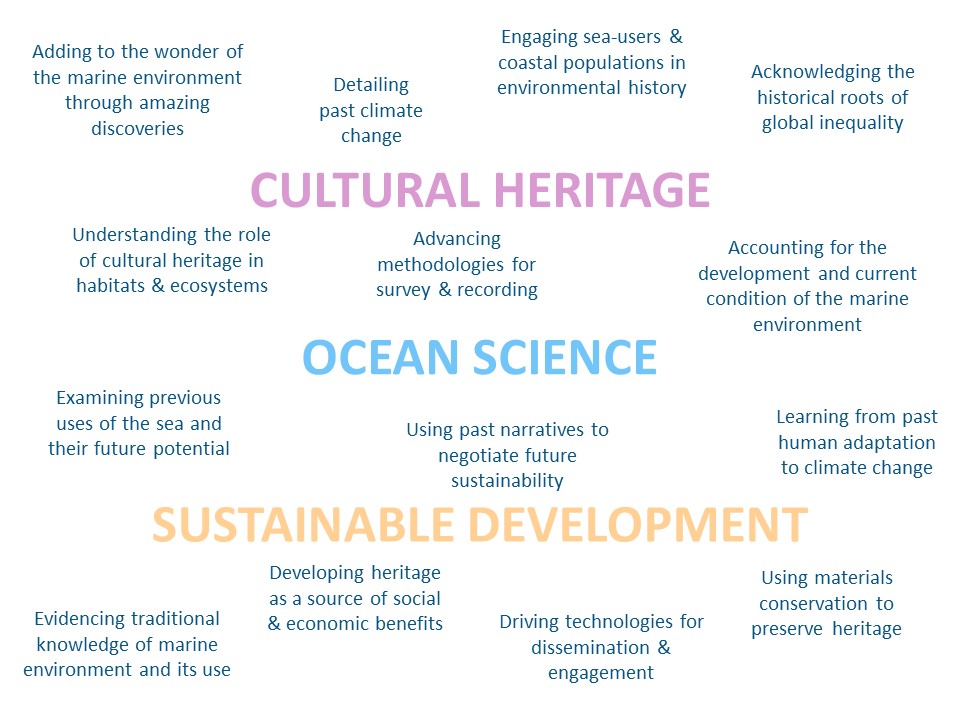 I’d like to underline this point about our strengths. Of course, we must be polite about seeking a place for maritime archaeology within the Ocean Decade. But politeness should not be mistaken for lack of confidence. We have expertise, skills, knowledge, perspectives that are directly relevant to the objectives of the Ocean Decade.

Maritime archaeology is not just helpful in understanding the relationship between people and the marine environment through time: it is indispensable.

Ask not what sustainable development can do for maritime archaeology …

… ask what maritime archaeology can do for sustainable development.

I want to conclude by saying that the Ocean Decade represents a huge opportunity for maritime archaeological research. The focus on ocean science, the research programmes that are implemented, and the likely media interest should all add to the next ten years being a great time to further archaeological research in our coasts and seas.

But to see it principally as an opportunity is to miss the point. The world and its populations are facing major crises and it is our responsibility to bring our discipline to bear on problems that we are well-placed to address.

We have ten years: let’s make a difference.