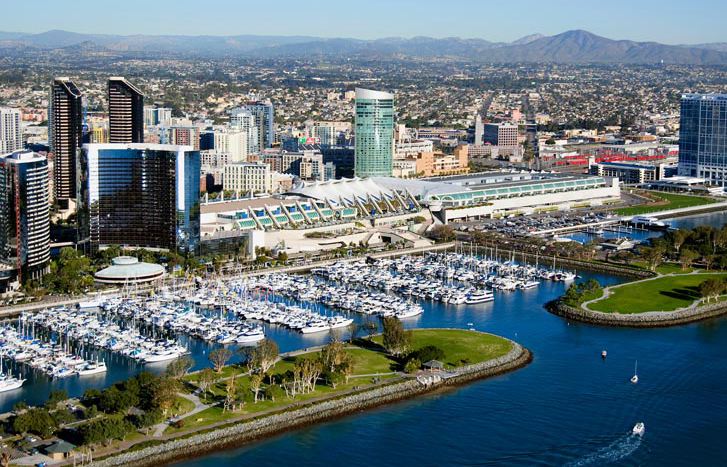 A Town Hall, The human dimension: integrating cultural heritage into the Decade of Ocean Science, was recently organised by ODHN at the Ocean Sciences Meeting 2020 (February 16-21, 2020) in San Diego, California. The Town Hall’s aim was to raise awareness within the broader marine science community of potential paths to integrate “social sciences and human dimension” aspects into the six societal objectives of the Decade now, during its Preparatory Phase (2018-20). Therefore, previous and future research projects that apply interdisciplinary methodologies to investigate maritime cultural heritage and collect data on the components of the marine environment and its natural heritage were highlighted.

The draft Roadmap for the Decade – published in June 2018 – states that “‘Ocean Science’ should be interpreted broadly as encompassing: social sciences and human dimensions” (p. 5, §9). This in part is echoed the Call for Action “Our Ocean, Our Future”, launched at the first UN Ocean Conference in 2017, where Member States recognized that the ocean “forms an important part of our natural and cultural heritage (§3)” and called on stakeholders to “develop comprehensive strategies to raise awareness of the natural and cultural significance of the ocean” (§13.d).

Broadly, those who are involved in maritime archaeology, and maritime/underwater cultural heritage management are unequivocally part of the “social sciences” referred to in the Decade. Maritime and underwater cultural heritage, the physical remains of past human interactions with the sea, are an inseparable part of the marine and coastal environments. Not only do the methods of archaeological investigation overlap and rely upon the marine sciences, but these investigations allow us to inform the present and understand future patterns where we face marine pollution, sea-level rise and other hazards, and contribute data to ecosystems management.

Despite some presentations having to be held in absentia due to lack of travel funding, the hour-long Town Hall managed to reach out to a variety of stakeholders. Over 40 people attended, with only 2 present who had any previous familiarity with maritime archaeology. First, an overview of the Decade and aims of ODHN were given, followed by a presentation on several of the very interesting interdisciplinary projects that have been conducted recently by BOEM in the Gulf of Mexico on reef habitats and shipwreck corrosion, in the Mid-Atlantic on habitats, and the characterisation of tribal cultural landscapes along coasts of the mainland US and Hawaii. The multi-agency Archaeological and Biological Assessment of Submerged Landforms project carried out in California’s Channel Islands National Marine Sanctuary has applied multiple acoustic methods to investigate submerged paleo-landscapes. This was followed by an overview of the type of Underwater Cultural Heritage that is located the US National Marine Sanctuaries. A summary of how cultural heritage can be applied and contribute to the six societal objectives of the Decade concluded the Town Hall.

At this point our hour was up, but when we concluded by asking if the audience felt they had learned something more about what “social science” could mean to the Decade, and if their knowledge of what maritime archaeology is had been better informed, we received very positive responses. Afterwards, we were approached by several interested audience members – those working with IPCC and NOAA – who asked for further contact information, references and literature. We recently received a very helpful review from one of the audience members on her blog, so it seems the message we were trying to impart has certainly reached a few marine scientists.

Context within the Ocean Sciences Meeting

The human dimension Town Hall followed an introductory Town Hall to the Decade, hosted a day earlier in San Diego by three members of the Decade’s Executive Planning Group: Craig McLean (NOAA), Martin Visbeck (GEOMAR) and Margaret Leinen (Scripps). This was attended by ca. 100 people – about 70% of whom indicated they had heard of the Decade and its objectives. In a meeting as large as Ocean Sciences (6,000 attendees), this was seen as very positive.

Importantly, Martin Visbeck pointed out that the “Decade is a platform to provide engagement and collaboration”, and data sharing with a variety of non-traditional stakeholders was highlighted. Craig McLean also noted the importance of mapping to a number of disciplines and specifically mentioned archaeology. This hopefully was also made clearer with the ODHN-organised Town Hall, but also through some other interdisciplinary projects highlighting cultural heritage that were part of the conference’s incredibly large poster session: “Reconstruction of Drowned Paleolandscapes and Potential Uses for Underwater Archaeology”. This was organised by Shannon Klotsko, Jillian M. Maloney and Amy Gusick, and abstracts for the session are on-line.

A timeline of the next few months for the Decade’s Preparatory Phase was outlined at the end of the Town Hall by Craig McLean. Next up are the 2nd Global Planning Meeting in Paris March 18-20 and the 2020 UN Oceans Conference in Lisbon June 2-6. The aim is to work on the larger Implementation plans for the Decade, which will be presented in Lisbon. At the time of writing, however, the 2nd Global Planning Meeting has been cancelled due to coronavirus precautions. However, this might now take place in a video-conferencing format. Any known updates to this timeline will be posted on this website, or can be found on the IOC’s Decade website. 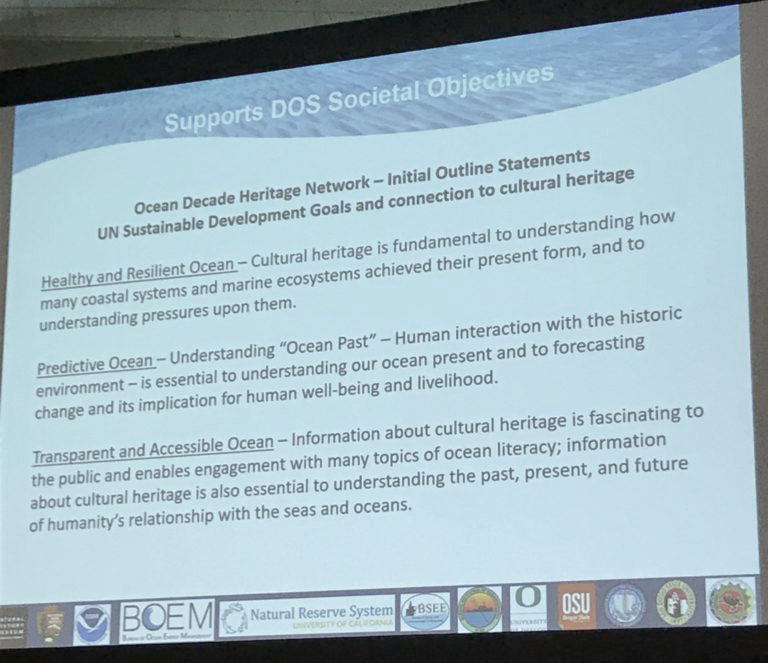 The Ocean’s Past – Underwater Archaeology and Ocean Science Webinar