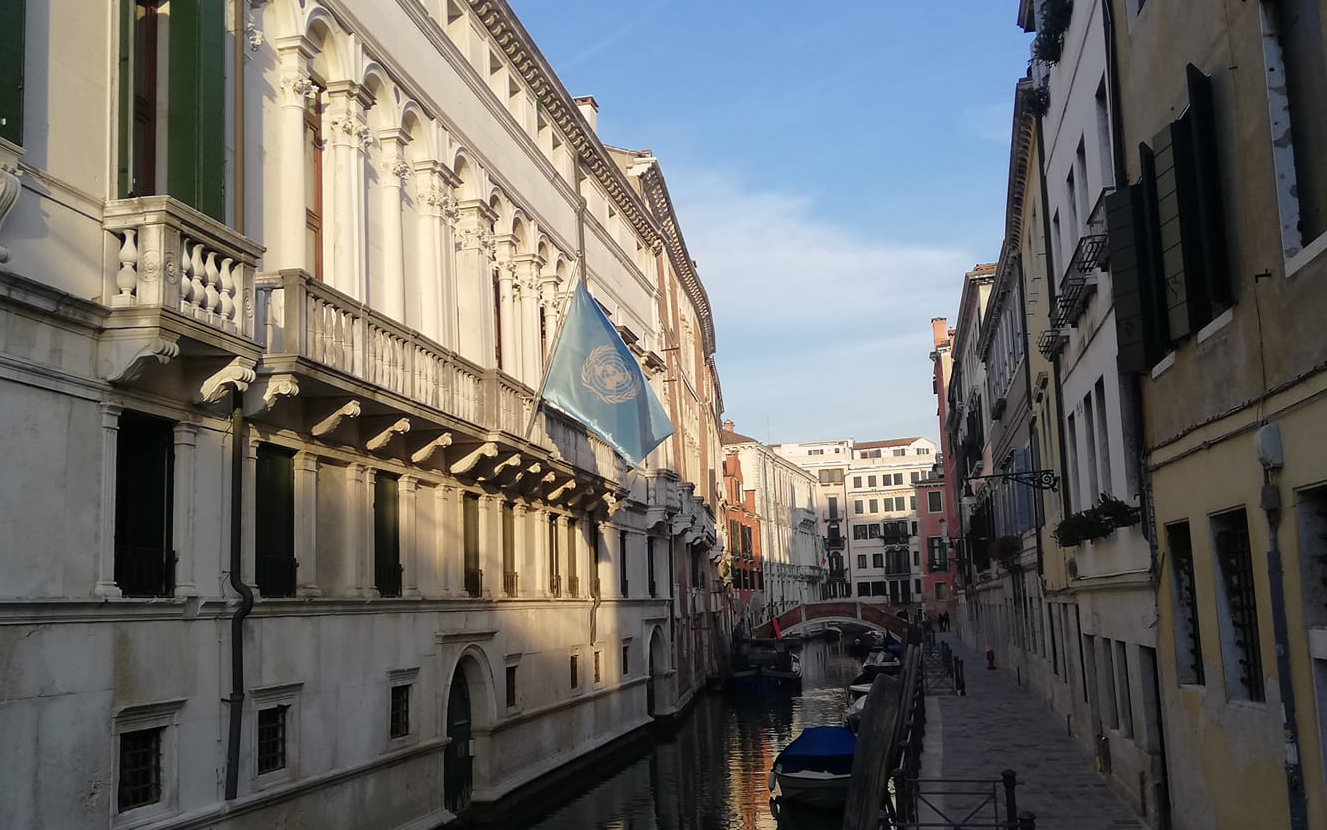 The Regional Workshop for the Mediterranean was organized in the framework of the UN Decade of Ocean Science for Sustainable Development (2021-2030), following the First Global Planning Meeting (GPM) held in May 2019 in Denmark. The workshop, hosted by the Italian Oceanographic Commission and co-organized with the IOC-UNESCO, the European Commission, the United Nations Environment/Mediterranean Action Plan (UNEP/MAP) and the Mediterranean Science Commission, took place in Venice (Italy) and gathered different stakeholders to discuss further the issues recognized during the 1st GPM and identify concrete actions and objectives from the Mediterranean Region. Thanks to the support of the Honor Frost Foundation, I was able to attend the meeting in the framework of the Ocean Decade Heritage Network (ODHN). It is important to highlight that I was the only participant representing the cultural heritage sector in this forum, despite its main focus to address the six societal goals defined by the Decade.

The main objective of the workshop was “to define and address regional issues and science questions to contribute to the development of the Implementation Plan of UN Decade in order to take into consideration the regional emerging environmental and ecosystem developments, new policy requirements, latest scientific and data advances, technological breakthroughs and evolving societal demands”.  Six specific working groups aimed to identify concrete deliverables and partnerships “to meet the Decade’s six societal objectives” based “in the perspective of the Mediterranean Sea uniqueness”.

The Mediterranean Workshop had a specific emphasis on natural sciences despite the calls from several experts to think “out of the box” and focus on the objectives of the Decade, which are society-driven and not merely scientific. The Barcelona Convention for the Protection of the Marine Environment and the Coastal Region of the Mediterranean adopted in 1995 was often mentioned as one of the main legal frameworks in the region. Nevertheless, although the preservation of cultural values is mentioned in its preamble, culture was not properly addressed in the workshop and no specialists were invited as speakers to present on the subject.

Some of the main topics discussed were related to climate change and rising sea levels in terms of scientific data and prediction rather than social impacts or historical data, as well as the need to establish a science-policy interface in which sciences can have a direct impact in designing local, national and regional policies. Related to this, the invasion of tropical species due to the warming of the Mediterranean Sea was also a topic of discussion as well as the need to reinforce capacity-building and the transfer of technology. The differences between the North of the Mediterranean basin, framed mainly within the policies of the European Union, and the South and the East, illustrated the necessity to increase cooperation, information and data sharing, as well as knowledge transfer as one of the main goals to achieve during the Decade.

Working Group V, dedicated to the productivity and sustainability of the Mediterranean Sea within the Decade, included cultural heritage as an important factor to develop, notably, within the tourism sector. The working group was focused in defining “science-based safe and sustainable thresholds for economic operations in the Mediterranean Sea driving the sustainable exploitation of non-renewable resources and the resources based on the Mediterranean Sea natural and cultural heritage”. The UNESCO 2001 Convention on the Protection of the Underwater Cultural Heritage was briefly mentioned as one of the many legal instruments and charters that need to be taken into account when designing national and regional policies dealing with the marine space. The increase in the use of this marine space and the exploitation of its resources was named by one speaker as “the Blue Gold Rush”. Although it was interesting to see how productivity was linked mainly to food production and the use of natural resources, it was widely acknowledged that there is a need to reinforce communication between archaeologists, cultural heritage practitioners and marine scientists in order to establish innovative ways of cooperation and methods to reach our common goals. The establishment of national entities to coordinate the implementation of the several oceans related international agreements and policies was emphasized. The Scientific Committee on the Underwater Cultural Heritage of ICOMOS (ICUCH) was mentioned during this session as a key international body, linked to UNESCO, to research matters concerning the discipline of maritime and underwater archaeology and its scientific, social and economic contribution. ODHN was, at the same time, recognised as the suitable platform to initiate exchanges in the framework of the Decade. The relation between culture, tourism and the environment was particularly stressed at the end of the working group.

Another of the main themes debated during the Mediterranean workshop, notably in the Working Group VI – which focused on transparent and accessible data, knowledge and technology – was Education and Ocean Literacy. Indeed, making people aware of the important relation of the ocean with the development of human societies as well as their ecosystems is one of the main focuses of the Decade. It was interesting to see how arts were presented as innovative means to express this nature-culture “oceanic” relation to the public. There was interest among Ocean Literacy experts to explore how to insert cultural heritage in their initiatives, in education curricula or other platforms. Cultural Heritage is at the core of the knowledge of the Mediterranean Sea. It was agreed that literacy cannot happen without considering the history and the development of the social links and uses of the Mediterranean Sea.

In this regard, the importance of having a successful communication strategy for the Decade, one that can reach all relevant sectors of the society, was the subject of a specific plenary session on the last day of the meeting.

Although the meeting was quite packed, full of discussions and panelists to define concrete actions, I managed to take the floor on several occasions during the three working groups I attended as well as in the final plenary session. As well as giving out the ODHN leaflet with its main objectives, promoting this website and social network links, I underlined ODHN’s importance as a platform to start the dialogue between cultural heritage experts and archaeologists with the rest of stakeholders concerned by the Decade. I felt it was important to emphasize that maritime archaeology is not only about shipwrecks, monuments or sunken cities but specifically about human behaviour and interactions with and within the environment over millennia, in this case the Mediterranean Sea, which cannot be understood in its present state without studying the cumulative impact caused by human societies in its extensive use and exploitation since prehistory. Despite having a view of archaeology and cultural heritage as being very sectorial and influenced mainly by the media and the “authorized heritage discourse”, it was important to see that all stakeholders and participants in the meeting were very sensitive about increasing the knowledge and protection of the Ocean.

Nature cannot be studied without taking into account the cultural component, as well as considering culture as a process embedded into its natural environment. Although I did not have a specific slot to make a presentation, I succeeded in making cultural heritage visible and insisting in its importance to achieve the Decade’s six societal goals. Many participants approached me, interested in exploring this further within their spheres of action in the Mediterranean, and the issue was included in the meeting’s concrete deliverable proposals.

At the end of the workshop, cultural heritage – whether tangible or intangible – was recognised as an important sector to take into account in social actions and plans developed during the Decade. It was also acknowledged that further research on the specific scientific contribution of maritime and underwater cultural heritage to the achievement of a sustainable ocean is needed. The long history of the Mediterranean’s peoples and their engagement with the sea was also highlighted as unique, providing key data to “fill the gaps” in its current understanding. ODHN was included as the main platform to discuss all cultural heritage issues concerning the Decade and was presented as a forum were archaeologists, cultural heritage specialists and other relevant stakeholders initiate dialogue with marine scientists, oceanographers and the traditional Ocean Sciences actors. It is expected that cultural heritage and the contribution of archaeology continue to appear in the meetings, debates and agendas preparing the Ocean Decade.

Will we, archaeologists and heritage practitioners, be able to stress and convey the importance of maritime and underwater cultural heritage as a driver to enable the sustainable development of our Oceans? My experience in this meeting left me with an optimistic feeling and also with the firm conviction that only through the understanding of culture as an indissoluble part of nature by the wider ocean community, archaeology will succeed in its role as a social science and will place itself as a relevant discipline in the shaping of our future.