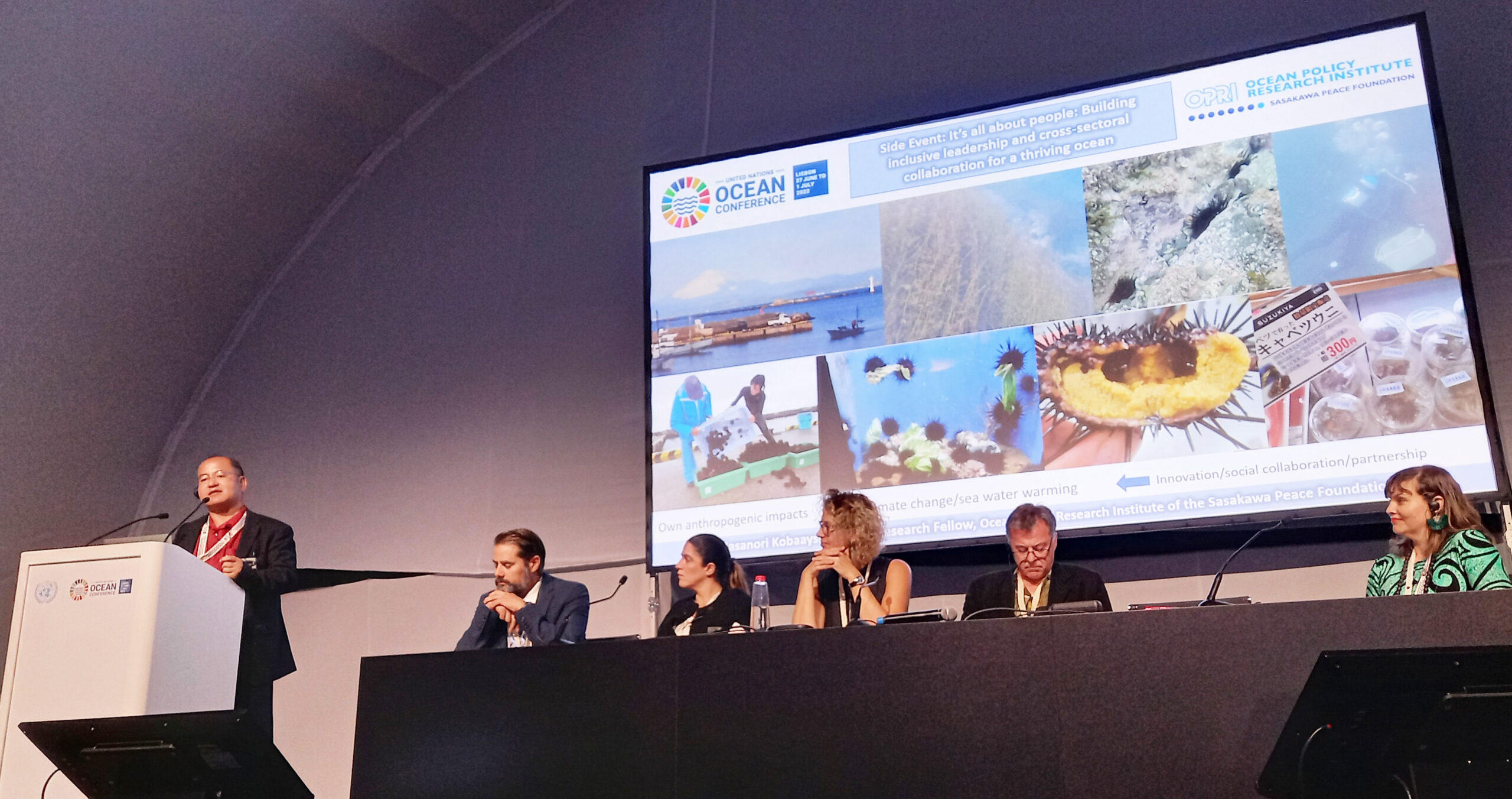 This year the UN Ocean Conference 2022, held in Lisbon, was co-hosted by Portugal and Kenya. The aim was to encourage and boost collective efforts to find evidence-based solutions to effectively address the challenges that the ocean is now facing. The conference hosted more than 6000 participants that included 24 heads of state and government bodies and over 2000 representatives from NGOs and civil organizations. The overarching theme of the Conference (see Programme here) was “Scaling up ocean action based on science and innovation for the implementation of SDG 14: Stocktaking, partnerships and solutions”, focusing on recommendations to support the implementation of Goal 14 (Life below Water), including:

On Thursday June 30 the UN Ocean Conference hybrid workshop “The history of the ocean species and environments and their impact on humanity” was hosted by the UNESCO Chair “Ocean’s Cultural Heritage” of NOVA University, Lisbon. This event combined partners from different ocean related institutions and organizations worldwide. With the stated goal to enhance collaboration and mutual understanding. The panellists were composed of Ulrike Guerin (UNESCO), Cristina Brito (NOVA University), Kerstin Forsberg (Planeta Océano), Garry Momber (Maritime Archaeology Trust UK), Elizabeth Stephenson (Marine Conservation Action Fund, New England Aquarium), Paul Montgomery (TCD Ireland) and Yolanda Sanchez (Ocean Leader and Co-founder of RELATO Marine Education Network) moderated by Joāo Costa (UNESCO Chair “Ocean’s Cultural Heritage”, NOVA University). The themes and discourses of this session brought together a number of aspects and points of interaction for possible collaboration for scholars from different backgrounds. The session included a range of international scholars brought together to debate a number of topics such as a wider role for and development of maritime cultural heritage, climate change, marine education and ocean literacy. One of the major themes of the session emphasised the value of investment in education and the involvement of indigenous communities in the long-term conservation of both natural and cultural heritage.

Within this forum several points were raised and reinforced by scholars seeking to encourage investment and utilisation of the wide range of natural and cultural heritage resources that can be used both as productive tools for management and education. The value of dynamic development and interaction was given a forum to emphasise the contribution that cultural heritage can make not only to the wider scientific debate on how we should manage our oceans but also as a valuable asset to communities and academic bodies involved in marine heritage conservation.

The meeting resulted in a number of positive and constructive outcomes from parties who took part in these debates, the most significant of which were authored by ODHN, Maritime Archaeology Trust UK, and the NOVA University’s Centre for the Humanities (NOVA FCSH).

ODHN’s Lisbon statement, authored by Athena Trakadas, addressed the value of cultural heritage and its essential role as a medium for communication with the wider public, in delivering sustainable development to the oceans unsteady UN Ocean Decade and UNESCO’s thematic indicators for culture in the 2030 Agenda. Additionally, it recognised the importance of cultural heritage stakeholders enabling ocean scientists and work to deliver SDG 14. The Maritime Archaeology Trust UK (MAT), represented by Garry Momber, also submitted a statement which highlighted the value of historical, archaeological and environmental data to our understanding of the long-term changes to the world’s oceans. It placed a heavy emphasis on the kind of environmental data being extracted from submerged sites to understand not only the past environmental state of that location but also ongoing changes that can be derived from historical sites.

Reflections on the closing of the 2022 UN Ocean Conference, Lisbon, Portugal – Blog | IUCN